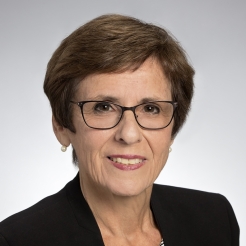 Osimo’s community outreach to Cape residents has been honored by a number of civic and community groups and institutions, including Boston University, the Massachusetts Federation of Business and Professional Women, the National Women’s Health Network, and the State Senate of the Commonwealth of Massachusetts. She has received the Arthur H. Wilde Award for Distinguished Service to Community, an Official Citation in Recognition for being named Woman of the Year and for Commitment to Women’s Health, and the Community Service Award–Local Community. In 2009 she was appointed to a two-year term on the Massachusetts Commission on the Status of Women, an independent state agency to advance women's equality statewide. In addition, Osimo was selected to participate as a presenter and mentor for first-time advocate reviewers participating in the Department of Defense Breast Cancer Research Program. She earned her bachelor’s degree in elementary education at Boston University.