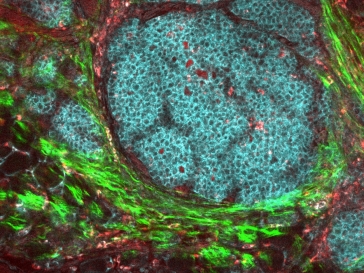 A study in Science received widespread media coverage the other week for claiming that much of cancer is simply the result of bad luck. The study was a follow-up to a similar analysis conducted by the same team at Johns Hopkins two years ago. Unlike the previous analysis, the new study includes breast and prostate cancer, as well cancer data from multiple countries.

But what’s really going on here? The first thing to note is that the analysis refers to cancer mutations, not the percentage of cancer cases. This is an important distinction, and one that was lost in many media reports. It matters because cancer does not simply arise from a single mutation in a single gene. It can take many mutations to cause a cell to become malignant. Put another way, a person may acquire one, or two, or more mutations over her lifetime and still not develop cancer. Attributing a certain percentage of cancer mutations to chance tells us very little about how other factors are involved in the development of the disease.

The researchers also based their calculations on the assumption that we know everything about what causes cancer, which means it’s likely they overestimated the proportion of random mutations. As a recent article in The Atlantic put it:

If this study had been done before HPV was discovered, it would have concluded that almost all cervical cancer mutations were [random] mutations, and that the disease wasn’t preventable. As it is, we have a vaccine for it.

Other aspects of the study that raise questions include the suggestion that the vast majority of childhood cancer is a result of random mutations. Yet, childhood cancer rates have been increasing steadily over the last several decades. Is that purely due to chance? Or, why are breast cancer incidence rates higher in U.S.-born Hispanics compared with foreign-born Hispanics living in the United States?

In the end, the study’s most compelling take home message, and one that the authors themselves do stress, is that 40 percent of cancers are in fact preventable. Many would argue the percentage is actually higher based on other reports and lines of evidence. Regardless, 40 percent is a large number—and represents millions of lives worldwide that could be saved by investing more in prevention research.

Clearly, the environment matters. It’s time we start focusing on that.

You can read Silent Spring’s response to the first study by the Johns Hopkins team here.