How to protect gymnasts from hazardous chemicals at gym facilities 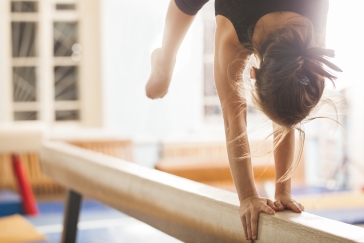 Being a gymnast has its risks—the countless jumps, twists, and landings can take a toll on the body. But there’s another, invisible risk: the equipment used in training contains hazardous flame retardant chemicals that accumulate in air and dust, and eventually end up in the athletes’ bodies. A new study, however, shows that replacing the foam cubes in the landing pits with flame retardant-free alternatives can significantly lower their exposures.

Previous studies have found high levels of flame retardants in dust at gym facilities, at levels an order of magnitude higher than in other indoor spaces. Studies have also shown high levels in the bodies of U.S. collegiate gymnasts, up to six times higher compared with the general population. One important source is the soft foam pits gymnasts use for practicing dismounts and other aerial work. The pits are filled with cubes made of polyurethane foam that are typically treated with flame retardant chemicals.

Rather than staying put in the foam, the flame retardants migrate into air and dust where they can be ingested and inhaled; they can also be absorbed through the skin. Scientists are concerned about exposure to flame retardants because the chemicals have been associated with health effects including thyroid problems, attention-deficit/hyperactivity disorder (ADHD), weight gain, infertility, and cancers.

“Gymnasts are particularly at risk because so much of their training happens during childhood and adolescence, when their bodies are developing and are vulnerable to chemical exposures,” says lead author Courtney Carignan, an epidemiologist at Michigan State University and a former gymnast herself. “And competitive athletes and coaches may have higher levels of these chemicals in their bodies than recreational gymnasts because they spend more time in the gym,” she says.

Given the health risks and the frequency of exposures, she and her colleagues decided to conduct an intervention study in which they partnered with a gym in Massachusetts and worked with the facility’s owner to replace the standard foam pit cubes with flame retardant free alternatives.

Reporting March 26 in the journal Environment International, the researchers observed a 5.4-fold decrease in levels of flame retardants that had accumulated on the gymnasts’ hands during practice, suggesting that replacing the pit cubes with flame retardant free alternatives is an effective strategy for reducing exposures. The researchers say the findings could have implications for other recreational facilities as well, including trampoline parks and climbing gyms that also have foam pits.

Even though the reduction in exposures was significant, the study did not entirely eliminate exposures, since there were still some residual amounts of flame retardants on the athletes’ hands. “This tells us there are likely other sources of chemicals in the gym, such as the landing mats, which could be opportunities for future interventions,” says Carignan.

To ensure the replacement of the pit cubes would not compromise fire safety, the team had an independent fire protection engineer inspect the gym facility before the flame retardant free cubes were brought in. The inspector determined the gym was safe since the building had sprinklers and smoke detectors, and other safety measures in place. As a result, the local fire and building departments approved the replacement of the pit cubes.

According to study co-author Robin Dodson, an environmental exposure scientist at Silent Spring Institute, not only do flame retardants pose a health risk, their use in products has shown to have little benefit in terms of improving fire safety. “Given the health risks, and the fact that these chemicals are not necessary, we should not be exposing young gymnasts to these harmful substances, especially when safer alternatives are available.”

Carignan and her colleagues have created a guidance document to help gyms make the transition, with information on purchasing flame retardant free equipment. Gyms can also limit exposures by requiring athletes and coaches to wash their hands with soap and water after practice and before eating.

Some gyms have already started taking steps to make their facilities healthier in response to the study’s findings. “This research provides the science to help gyms and other facilities have confidence in their decision to reduce their use of toxics,” says co-author Joy Onasch, Small Business and Industry Program Manager at the Toxics Use Reduction Institute at University of Massachusetts Lowell, which provided funding for the intervention study.

Gym owner Janine Walsh, who runs Walker's Gymnastics & Dance in Lowell, Mass., recently made the switch to flame retardant free pit cubes. “Gymnastics is a physically demanding sport that requires the development of healthy habits early on,” she says. “Those habits should include reducing exposures to harmful chemicals that could harm our health, especially the health of our children.”

The study website includes a fact sheet and hand-washing posters for gyms, as well as other resources.