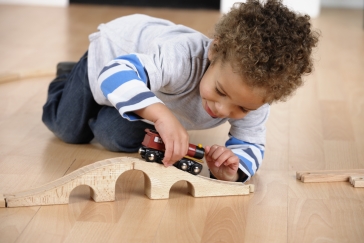 Household dust exposes people to a wide range of toxic chemicals from everyday consumer products, according to a new study. These are chemicals found in consumer products and building materials and have been associated with numerous health effects including cancer, hormone disruption, and development and reproductive problems.

The study is the first comprehensive analysis of toxic chemicals in house dust, compiling data from more than two dozen studies throughout the United States. It reveals what the average American is likely exposed to on a routine basis. “We’ve known, from our previous research, that these chemicals can end up in indoor dust,” says co-author Robin Dodson, an environmental exposure scientist at Silent Spring Institute. “Now we can say with confidence that these chemicals are in fact pervasive in U.S. homes, which is highly concerning given the possible health effects.”

Reporting September 14 in the journal Environmental Science & Technology, Dodson and her colleagues at the Milken Institute School of Public Health at the George Washington University and the Natural Resources Defense Council (NRDC) identified 45 potentially toxic chemicals in indoor dust. Ten of these chemicals were found to be present in 90 percent of dust samples.

“When people think of air pollution, they tend think of smokestacks spewing nasty stuff into the air,” says Dodson. “But, over the years, our research has shown that the indoor environment is an important, if not more important, source of exposure to harmful chemicals.” Chemicals from consumer products are released into the air and accumulate in dust. People can inhale or ingest small particles of dust or even absorb them through the skin. Infants and young children are particularly at risk because they crawl and play on the floor, and frequently put their hands in their mouths.

For each chemical, the researchers estimated how much is likely get into young children’s bodies. They discovered that a flame retardant called TCEP, found in furniture, baby items, electronics, and other consumer products, had the highest estimated intake. Compared with other substances, TCEP is more readily inhaled due to the nature of the chemical, explains Dodson. “So even though it wasn’t at the top of the list in terms of concentrations in dust, we estimated that it gets into children’s bodies at the highest rate,” she says.

The researchers also make the point that people are exposed to a broad mixture of chemicals, each chemical with its own health effects. In other words, exposure to even small amounts of chemicals in combination can lead to an amplified health risk, especially for developing infants or young children. “That’s why it’s important that when we study the health effects from these exposures, we look at these chemicals together and not just one at a time,” says Dodson.

In the meantime, consumers who want to reduce their exposure to chemicals in household dust and the environment around them can take a few simple steps such as keeping dust levels low by using a strong vacuum with a HEPA filter, washing hands frequently, and avoiding personal care and household products that contain potentially dangerous chemicals.

“Consumers have the power to make healthier choices and protect themselves from harmful chemicals in everyday products,” says Dodson. “These things can make a real difference not only in their health but also in shifting the market toward safer products.”

The other co-authors of the study include researchers from Harvard T. H. Chan School of Public Health and University of California, San Francisco. Funding for the study was provided by the Natural Resources Defense Council, the National Institute of Environmental Health Sciences and the U.S. Department of Housing and Urban Development.