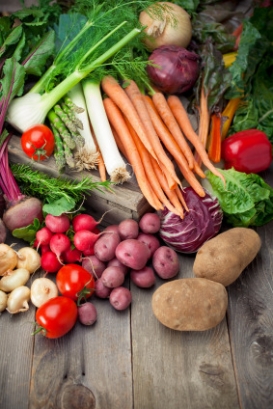 Food packaging is a major source of exposure to the hormone disrupting chemicals bisphenol A (BPA) and bis(2-ethylhexyl) phthalate (DEHP) in children and adults, according to new research published today in Environmental Health Perspectives. The study, conducted by Silent Spring Institute and Breast Cancer Fund, shows that a fresh food diet significantly reduces levels of these chemicals, after just three days.

Researchers assessed BPA and DEHP levels in adults and children from five families by testing their urine before, during, and after a three-day fresh food diet. During the fresh food diet, participants ate organic meals with no canned food and minimal plastic packaging, and stored food in glass and stainless steel containers.

While participants were eating the fresh food diet, average levels of BPA in urine decreased by over 60%. When participants returned to conventional diets, their BPA levels increased back to pre-intervention levels. Average levels of the DEHP metabolites (chemicals that measure DEHP exposure) dropped by over 50% during the fresh food diet. Reductions were even more pronounced for the highest exposures, which decreased by over 70% for BPA and over 90% for DEHP.

“The study provides compelling evidence that removing BPA and DEHP from food packaging would substantially reduce exposures for adults and children. The good news is that now we know how much food packaging contributes to our overall exposure to BPA and DEHP, and we know how to significantly reduce exposures, both on a personal and societal level,” said lead author of the study and research director of Silent Spring Institute, Ruthann Rudel. “As we replace BPA and DEHP, substitute chemicals need to be tested for safety before they’re put into use so we don’t end up with a revolving door of hazardous chemicals in consumer products.”

Exposure to BPA has been associated with effects on the developing brain, and mammary and prostate glands in laboratory studies. DEHP, at common exposure levels, has been shown to affect male reproductive development, steroid hormone levels, and sperm quality in human and laboratory studies. Three of the five phthalates measured in this study, including DEHP, were recently banned under Europe’s REACH regulation because of concerns about reproductive toxicity.

BPA is often used to make hard polycarbonate bottles and the epoxy resin lining of food and beverage cans, and DEHP is used to soften plastic, including some plastic food wrap. BPA and DEHP are also found in a variety of consumer products, including thermal receipt paper, shower curtains, and children’s toys. Silent Spring Institute previously measured BPA and DEHP in household air and dust in 170 homes in its ongoing Household Exposure Study, and DEHP was detected in 100% of homes tested.

The authors note that while research unfolds, there are precautionary steps individuals can take to reduce their exposures to BPA and DEHP, including avoiding canned food and plastic packaging, cooking more meals at home with fresh ingredients, and using glass and stainless steel containers to store food.