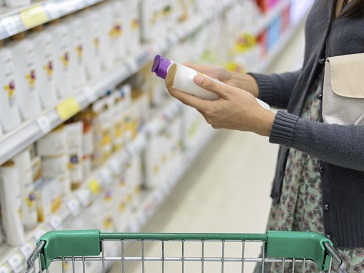 Estrogen-mimicking chemicals called parabens, which are commonly found in an array of personal care products, may be more dangerous at lower doses than previously thought, according to a new study. The findings, published online October 27 in Environmental Health Perspectives, could have implications for the development of breast cancer and other diseases that are influenced by estrogens. The study also raises questions about current safety testing methods that may not predict the true potency of parabens and their effects on human health.

Parabens are a class of preservatives widely-used in consumer products like shampoos, cosmetics, body lotions, and sunscreens. The chemicals are considered estrogenic because they activate the same estrogen receptor as the natural hormone estradiol. Studies have linked exposure to estradiol and related estrogens with an increased risk of breast cancer, as well as reproductive problems. As a result, the use of parabens in consumer products increasingly has become a public health concern.

How much parabens might contribute to breast cancer risk is unclear. “Although parabens are known to mimic the growth effects of estrogens on breast cancer cells, some consider their effect too weak to cause harm,” says lead investigator Dale Leitman, a gynecologist and molecular biologist at University California, Berkeley. “But this might not be true when parabens are combined with other agents that regulate cell growth.”

However, existing chemical safety tests, which measure the effects of chemicals on human cells, look only at parabens in isolation and fail to take into account that parabens could interact with other types of signaling molecules in the cells to increase breast cancer risk. “Scientists and regulators are using potency estimates from these kinds of tests and are assuming they are relevant to what goes on in real life. But if you don’t design the right test, you can be off by a lot,” says co-author Ruthann Rudel, a toxicologist at Silent Spring Institute.

To better reflect what goes on in real life, the researchers looked at breast cancer cells expressing two types of receptors: estrogen receptors and HER2. Approximately 25 percent of breast cancers produce an abundance of HER2, or human epidermal growth factor receptor 2. HER2-positive tumors tend to grow and spread more aggressively than other types of breast cancer.

The researchers activated the HER2 receptors in breast cancer cells with a growth factor called heregulin that is naturally made in breast cells, while exposing the cells to parabens. Not only did the parabens trigger the estrogen receptors by turning on genes that caused the cells to proliferate, the effect was significant: The parabens in the HER2-activated cells were able to stimulate breast cancer cell growth at concentrations 100 times lower than in cells that were deprived of heregulin.

The study demonstrates that parabens may be more potent at lower doses than previous studies have suggested, which may spur scientists and regulators to rethink the potential impacts of parabens on the development of breast cancer, particularly on HER2 and estrogen receptor positive breast cells.

“While this study focused on parabens, it’s also possible that the potency of other estrogen mimics have been underestimated by current testing approaches,” says co-author Chris Vulpe, a toxicologist who is now at the Center for Environmental and Human Toxicology at the University of Florida College of Veterinary Medicine.

Since people come into contact with multiple chemicals every day through consumer products, understanding how mixtures of hormone-mimicking chemicals and growth factors interact to promote cell growth might better reflect a person’s potential cancer risk from exposure. In particular, one area of increasing concern is how exposure to multiple chemicals during critical periods of development including puberty and pregnancy increases a person’s susceptibility to breast cancer later in life.