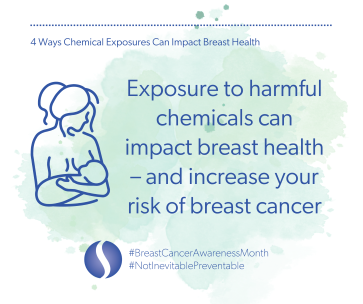 According to leading experts in breast cancer and environmental health, exposures to harmful chemicals in everyday products and the environment can harm the breast in a variety of ways. In a new review, the researchers highlight the latest science linking toxic chemicals not only with breast cancer, but also with early breast development, problems breastfeeding, and increased breast density, and call for major changes in the way chemicals are tested for safety in the United States.

“The breast goes through many different changes over the course of a woman’s life—during puberty, pregnancy, and menopause—that are guided by the body’s hormones,” says co-author Jennifer Kay, a research scientist at Silent Spring Institute. “These changes also make the breast vulnerable to environmental influences.”

Scientists have identified hundreds of chemicals, called endocrine disrupting chemicals (EDCs), that disrupt or interfere with natural hormones. The chemicals are used in common products like hair dyes, food packaging, pesticides, and furniture. They also end up in drinking water and accumulate in household dust. Since EDCs are so ubiquitous, people can be exposed to multiple EDCs every day—the effects of which can add up.

Black women, in particular, have higher exposures to some EDCs. They also have higher rates of girls starting puberty early, are less likely to breastfeed, and have more aggressive forms of breast cancer.

Reporting in the journal Current Environmental Health Reports, the researchers present evidence from both human and animal studies describing the many ways EDCs impact the breast and how these impacts coincide with worrisome health trends:

The review authors point out that current methods used by regulators to screen chemicals for toxic effects do not adequately consider their effects on the breast, especially during vulnerable time periods. “These outdated methods are not capturing critical information and are putting women and children at risk,” says co-author Ruthann Rudel, director of research at Silent Spring Institute. The authors describe shortcomings in current practices, which typically rely on experimental studies in rodents to predict effects in humans. Some of the most concerning gaps are:

The authors make specific recommendations, including:

“Cures are important, but because of the high prevalence and severity of breast cancer, we should be doing more to bring down incidence rates, and that includes reducing exposures to chemicals that contribute to the disease,” says Kay.

Funding for the study was provided by the National Institute of Environmental Health Sciences, the FREIA project (supported by the European Union’s Horizon 2020 research and innovation programme), and charitable donations to the Safer Chemicals Program at Silent Spring Institute.