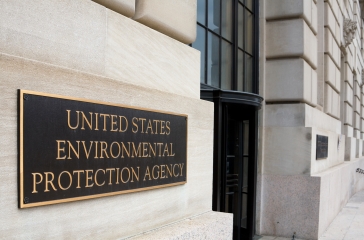 When Congress passed legislation in 2016 reforming the chemical safety law known as the Toxic Substances Control Act (TSCA), we had high hopes. As we wrote last year, the bill gave the EPA the authority to (among other things) require additional chemical safety testing in order to regulate existing chemicals. Now the EPA has released the final rules for how the agency is going to do that. However, these final rules are weaker than we had hoped, raising concerns that the EPA will not adequately regulate chemicals that may harm human health.

What are the rules for?
Given that there are thousands of chemicals in use today, the new rules dictate how EPA will determine which chemicals should be prioritized for evaluation and how they should be evaluated. Chemicals that are found to pose an unreasonable risk to health or the environment will then go on to be regulated.

Is there any good news?
There is some good news about the final rules. The EPA will consider “intended, known, or reasonably foreseen” uses of a chemical, and if any of the uses of a chemical looks potentially unsafe, the EPA will start a full risk evaluation on the whole chemical and its identified uses. Furthermore, the EPA has included several opportunities for public comment once the process is underway.  These comment periods provide one important way for public health groups to encourage the EPA to implement the rules in a way that prioritizes health and safety.

What’s the bad news?
However, we have also identified some ways that the regulation has been weakened.

Why were the rules weakened?
Our analysis of the public comments and changes to the rule suggest that the final rules were heavily influenced by the voice of industry. Before the rules were finalized, the EPA accepted formal public comments on their draft rules. We looked at each public comment and classified comments according to source: industry (which included trade associations and individual manufacturers), non-profit (public health and environmental groups), academic (groups and individuals with academic credentials), and individuals (individuals not obviously associated with one of the other categories). We found that industry comments make up a significant portion of the overall public comments on record, commenting nearly 3 times as much as non-profit, public health, and academic groups combined (see Figure 1). When we analyzed the content of the comments and compared them with the draft and final versions of the rule, we found that comments by industry often opposed the requests of non-profit and academic groups, and that key changes in the final rule favored the requests made by industry (see Table 1).

Table 1. Changes in the final risk evaluation rule are aligned with comments from industry. 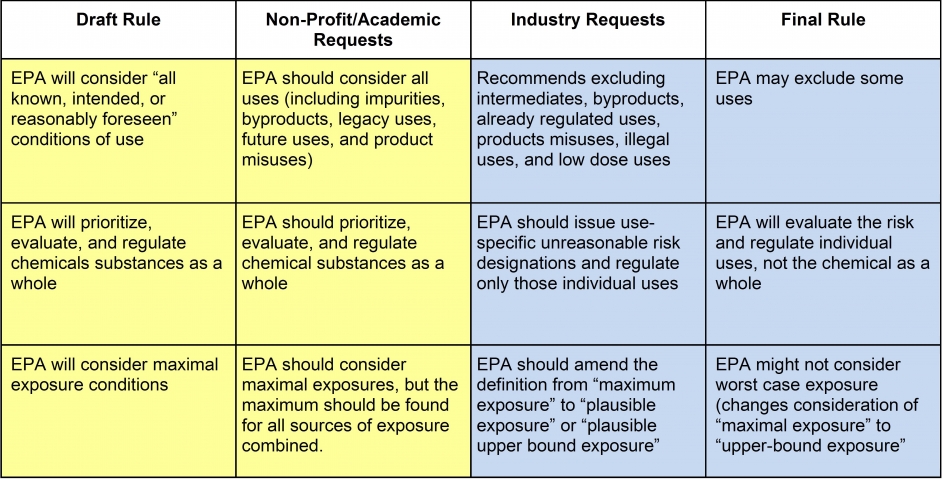 The outsized activity and influence of the chemical industry we see here is also seen in (and enabled by) its financial power. According to Open Secrets, the chemical and related manufacturing industries spent over $55.6 million in 2016 on lobbying costs. American Chemistry Council, a major industry voice commenting on the TSCA rules, alone spent over $9 million on lobbying in 2016. Compare that to Safer Chemicals Healthy Families, a public health non-profit group who commented on the TSCA rules, which spent just over $45 thousand on lobbying costs that same year. 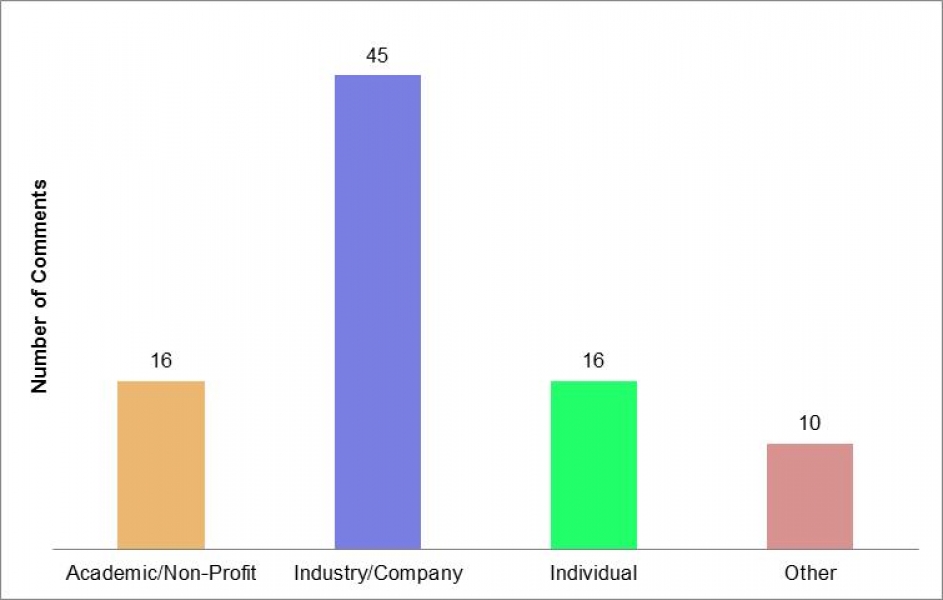 Although the rules are now final, there will be opportunities in the future to influence how the EPA handles each chemical. The EPA is currently accepting comments on their plans to evaluate the first ten chemicals identified as needing further study, and we will be following this process closely. We need the public to stay informed and engaged, and we encourage you to support us and other groups in calling out instances where the process weakens public health protections.

While EPA works to implement TSCA, other efforts will be critical to the overall strategy to reduce harmful chemical exposures, especially for uses not regulated under TSCA, such as ingredients in personal care products, food, drugs, or pesticides.  Key efforts include state, local, and individual actions to pressure manufacturers and brands to switch to safer alternatives.

For more information on simple things you can do to reduce chemicals in your home and beyond, check out the tips in Detox Me, Silent Spring’s mobile app for healthier living.

Jessica Helm is a postdoctoral research fellow at Silent Spring Institute. She studies the sources and mechanisms of environmental effects on health, and created the Detox Me app for exposure reduction.

Kathryn Rodgers is a staff scientist at Silent Spring Institute. Her work focuses on measuring exposures to endocrine disrupting chemicals.

Jennie Lytel-Sternberg is a 2017 summer intern at Silent Spring Institute. She is a student at Vassar College studying Science, Technology, and Society and Chemistry.