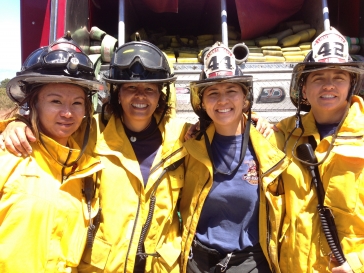 When women firefighters in San Francisco raised concerns about elevated breast cancer rates among their ranks, Silent Spring joined forces with a team of researchers and advocates to help find answers. They established the first study to investigate on-the-job exposures to chemicals linked with breast cancer in female firefighters. Now, several years later, the study is at the forefront of environmental health research, using cutting-edge tools to sift through vast amounts of exposure data and hone in on the real chemical culprits.

During a fire, firefighters breathe in a slew of toxic chemicals released from furnishings, building materials, and consumer products when they burn. This complex mix of chemicals includes known carcinogens, many of which are linked with breast cancer. It’s not surprising then that these first responders have higher cancer rates than the general population.

Yet, most of what is known about cancer in firefighters comes from studies in men. Very little is known about cancer risks in women. “Women now represent approximately 17 percent of uniformed fire officers in major U.S. cities, with San Francisco having one of the highest proportions of women firefighters in its department,” says Ruthann Rudel, Silent Spring’s director of research. “As their numbers grow, it’s important that we look at how their job might be affecting their health.”

To address this gap, Silent Spring, along with scientists at University of California, Berkeley, San Francisco firefighters, and health advocates formed the Women Firefighters Biomonitoring Collaborative. The group collected blood samples from more than 80 female firefighters (and another 80 or so office workers for comparison), and are now analyzing the samples for a range of chemicals including flame retardants and water- and stain-resistant compounds called PFASs.

The researchers tested for these chemicals because of their links with breast cancer and also because they suspect these chemicals are ones that firefighters are likely exposed to at high levels on the job. “But we also need to understand what else these women are exposed to that we don’t already know about,” says study investigator Vincent Bessonneau, a research scientist at Silent Spring.

Bessonneau, who has a background in analytical chemistry and bioinformatics, is trying a new tack. Instead of testing for known hazardous chemicals, he is looking at the entire spectrum of environmental chemicals found in the human body—everything an individual may be exposed to in their environment—otherwise known as the human exposome.

To study the exposome, Bessonneau and his colleagues are using sophisticated detection tools that can analyze thousands of small molecules in a single blood sample. By comparing the molecular profiles of firefighters with those of office workers, he and his colleagues can identify which environmental exposures are characteristic of firefighters. The next step is to see if female firefighters with high levels of certain environmental chemicals also have biological markers associated with early signs of disease, such as changes in hormones or molecular markers of breast density.

This new approach promises to transform environmental health research. “We’re trying to uncover new exposures, new chemicals that we might have missed before because we didn’t know to look for them,” says Bessonneau. “Once we identify these new chemicals, we can figure out where they might be coming from so we can provide people with strategies for reducing their exposures that are more personalized and tailored to their community.”

“We also want to draw attention to the different ways in which firefighters can be exposed to harmful chemicals, for instance through firefighting foams,” she says. These foams, which are used for putting out fuel fires, contain toxic PFASs chemicals. The same types of chemicals are also used as water-repelling agents in firefighters’ turnout-gear. Not surprising, preliminary results from the study show elevated levels of these chemicals in female firefighters’ bodies.

“These women, who risk their lives every day to save others, should not be getting breast cancer because of toxic chemicals where they work,” says Rudel. “There are ways to help them reduce their risk like switching to firefighting foams and turnout gear without toxic chemicals,” she says. “That would be a good start toward creating a safer and healthier work environment for everyone.”