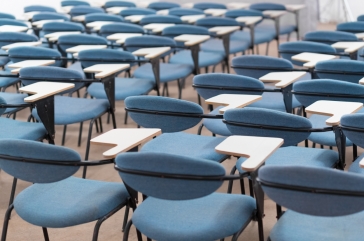 There are good reasons to be worried about indoor air quality right now, in light of COVID-19. In addition to transmitting infectious agents, indoor spaces can also be a source of harmful chemicals in consumer products. A new analysis of indoor spaces on college campuses finds dust in classrooms and lecture halls harbors high levels of toxic flame retardants used in furniture raising health concerns from everyday exposures.

“The coronavirus pandemic has revealed that indoor spaces have an enormous impact on people’s health,” says lead author Kathryn Rodgers, MPH, a staff scientist at Silent Spring Institute. “So, it’s critical that we find ways to reduce harmful exposures and create the healthiest indoor environments we can.”

Scientists have long raised concerns about the use of flame retardants in products because the chemicals are linked with a range of health problems including thyroid disease, infertility, decreased IQ, and cancers. What’s more, the chemicals don’t stay put. Studies show flame retardants migrate out of furniture, accumulate in dust, and end up in people’s bodies.

Reporting September 3 in the journal Environmental Science & Technology Letters, Rodgers and her colleagues collected dust from classrooms and lecture halls on four college campuses in New England. Some of the spaces adhered to older, outdated standards for furniture flammability (TB117 and TB133), which resulted in manufacturers adding large amounts of flame retardants to furniture. Others followed the more recent updated standard (TB117-2013) that allows for furniture free of toxic chemicals.

In older TB133 classrooms, levels of a phased-out flame retardant and its replacement (BDE 209 and DBDPE) were three and eight times higher, respectively, than the highest levels previously reported in indoor spaces in the United States. That report came from an earlier study by Silent Spring that looked at dust in college dorm rooms.

The team also detected the carcinogen TDCIPP and a structurally similar flame retardant called TCIPP in rooms meeting the newer standard, likely due to the chemicals’ widespread use in many other materials such as plastics, rubber, and textiles.

“This is an important study and the first to evaluate the impact of the new TB117-2013 standard on flame retardant levels in dust,” says Arlene Blum, executive director of the Green Science Policy Institute. “It shows that updating an obscure fire standard leads to lower levels of harmful flame retardants and healthier indoor spaces.”

Despite evidence that flame retardants do not improve fire safety, independent standard-setting organizations and some industry groups maintain their necessity in furniture. Yet, there are other ways of achieving fire safety without resorting to toxic chemicals, says Rodgers. Non-chemical methods, such as automatic sprinklers, smoke detectors, smoking bans, and the use of inherently less-flammable materials are effective and don’t impact human health, she says.

In recent years, TB117-2013 has become the de facto national standard across the U.S. As a result, furniture free of flame retardants is now widely available and some schools have begun replacing their furniture with healthier products. However, given furniture’s long lifespan, on the order of 10 to 15 years, these changes can take time and not every school has the means to make the switch.

“For schools with fewer resources, replacing all their furniture may not be an option,” says co-author Robin Dodson, ScD, an environmental exposure scientist at Silent Spring. “Still, there are steps staff and students can take to limit their exposure to flame retardants on campus.”

Keeping dust levels low, vacuuming regularly with a vacuum that has a HEPA filter, drawing fresh air from the outside into the building, and washing hands frequently especially before eating, are effective at reducing harmful exposures and maintaining a healthy environment, says Dodson.

Findings from the study are not just relevant to colleges, the researchers note, but other spaces as well such as offices, libraries, and hospitals. “Large institutions fill their spaces with lots of furniture, so it’s important for these groups to be mindful of how their choices in furniture can affect people’s health,” says Rodgers.

The new study is part of a larger initiative called the Healthy Green Campus project, which educates colleges on the health risks posed by everyday toxic chemicals in products and offers guidance on how schools can reduce their chemical footprint.